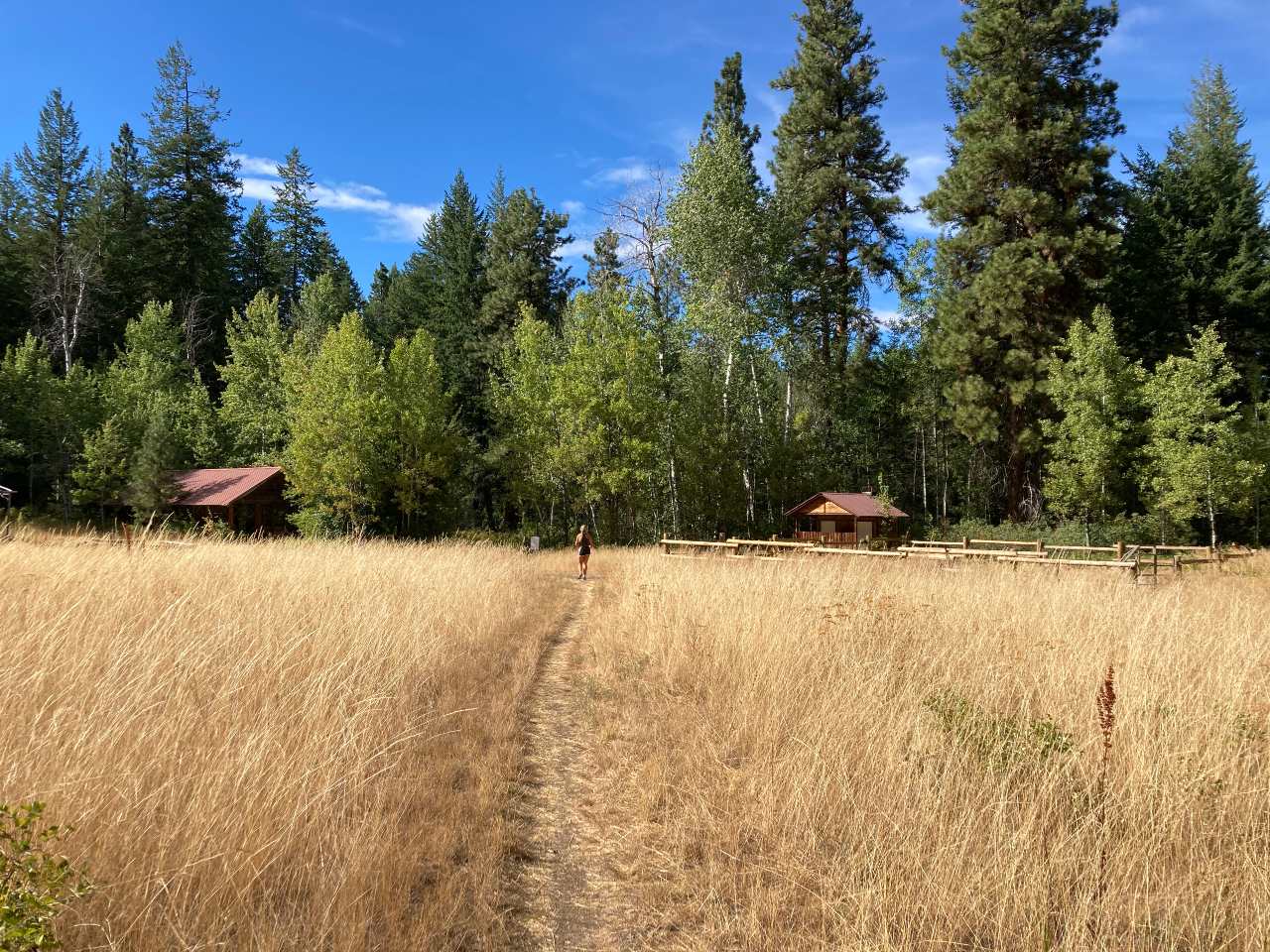 Rural Changes in the Methow Valley

We all see that the Methow Valley is changing. New people, new houses, crowded trailheads—it’s clear that something is happening to the place we know and love. At the same time, we have new community members, new board members, and increased energy surrounding zoning and housing issues. The changes we see happening in the Methow Valley aren’t all bad.

Over the past two years, TwispWorks conducted a Comprehensive Economic Study that analyzes every aspect of the economy—from tourism and recreation to residential building and non-profits. We now have an idea how many second homeowners and remote workers live in the Methow Valley. We know how much time they spend here and what they contribute to our economy and community. Part of these changes are structural. The national shifts in our economy from manufacturing to service-based industries and the acceleration of remote work due to Covid-19 are changes we see here in the Methow Valley, and many of them are here to stay.

We also heard from over 1,000 respondents about their fears, hopes, and visions for the future of the Valley. Residents spoke out on affordable housing, gentrification, growth, and the loss of place. They talked about the need for intentional development and climate change initiatives to address poverty and wildfires. Overall, we received over 2,500 qualitative comments on the nature of our Valley and what we envision for the future. We are excited to present these findings in the TwispWorks Comprehensive Economic Study, available soon on our website.

Many of you are attending the class series, Rural Changes in the Methow Valley, a collaboration between TwispWorks and the Methow Conservancy. This class brings together TwispWorks’ Economic Study by Julie Tate-Libby and research on the Methow watershed by biologist Julie Grialou. We believe collaborations like this can help solve important issues facing our community. For more information email: jtate-libby@twispworks.org. 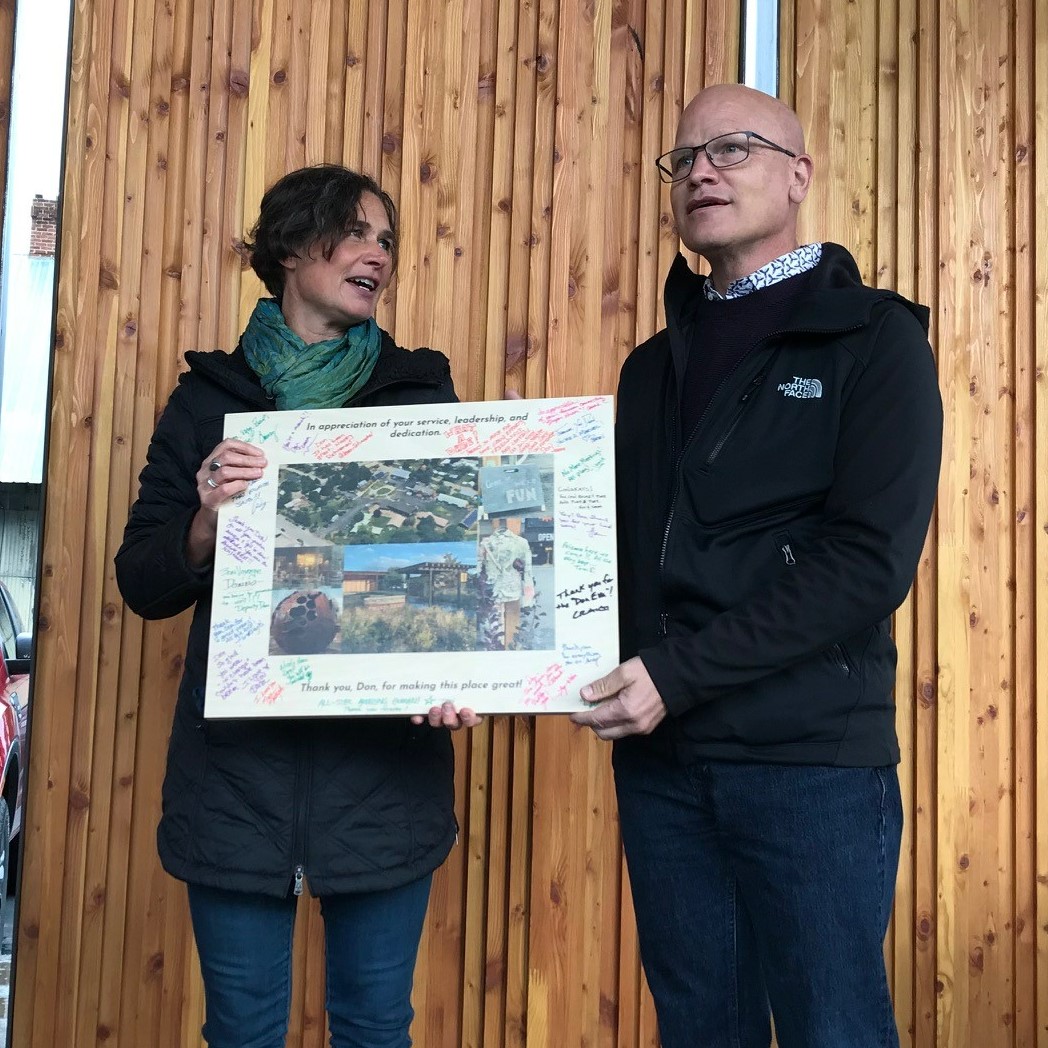 It is with mixed emotions that we say goodbye to our Executive Director Don Linnertz. Don is retiring from his role at TwispWorks though he will continue to serve on several committees in an advisory role. Don has been involved with TwispWorks since his move to Valley in 2014. After serving on the board for some time, Don became Executive Director in 2015. Since then, TwispWorks has transformed into a vibrant, active campus full of artisans and small businesses, including the Little Star South Campus, the Old Schoolhouse Brewery Taproom, the Independent Learning Center, and FORK.

Don describes himself as a project manager. “I get stuff done,” he says.
Never a truer statement, Don has been busy over the past six years! Under his directorship, TwispWorks achieved financial self-sufficiency for TwispWorks and was deeded the title to the property by the donors who purchased it in 2010. TwispWorks also finished its campus buildout to include the new pavilion and performing arts center, the Methow Valley Goods Store, and a soon-to-be vocational-tech facility for Liberty Bell High School students.

Don also spearheaded the inception of the Methow Investment Network, a matchmaking organization that pairs investors with startup businesses in the Methow Valley. Since 2016, the MIN has invested over 3 million dollars into 20 new businesses and business acquisitions. These businesses employ nearly 100 people in the Methow Valley and represent a thriving business community supported by local investment.

In addition to the MIN, Don oversaw the development of the Healthy Business Program, the Small Business Emergency Grant, the Methow Made marketing brand, the Broadband Action Team, and countless other partnerships with non-profits and community organizations.

While TwispWorks is excited to welcome Interim Director Sarah Brown to serve in Don’s place, we know that Don is irreplaceable. From his meticulous attention to detail to his extraordinary ability to remember faces and get to know people, Don has integrated into our community in a way few others have. Not only does Don know and love this community, he understands it. At TwispWorks, we call Don the brain glue that holds everything together. The brain glue, of course, is his big heart. We will miss you, Don!

Help Us Care for Our Home

This handy brochure, produced by a TwispWorks + Resilient Methow partnership, gives Methow Valley visitors 23 ways to be good to this amazing place we call home. Let’s share it far and wide! 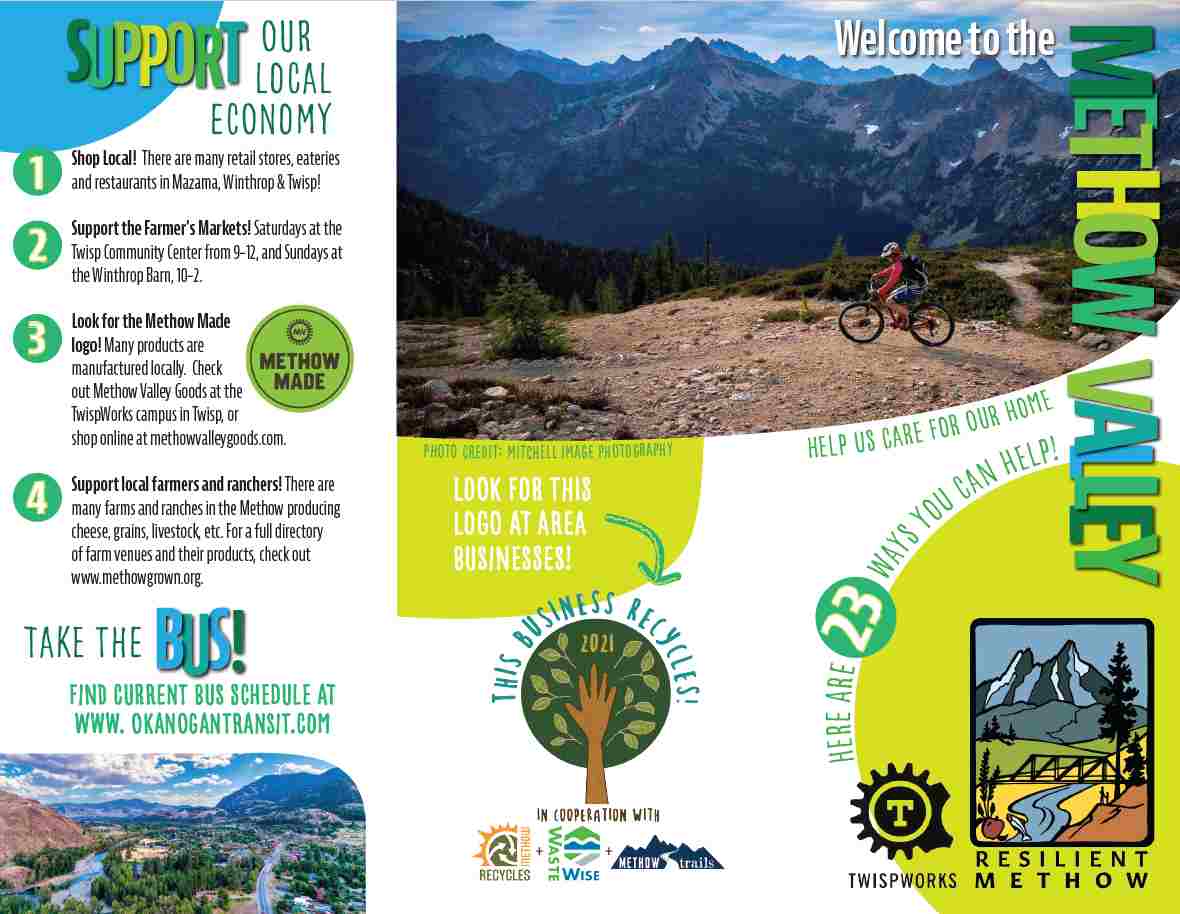 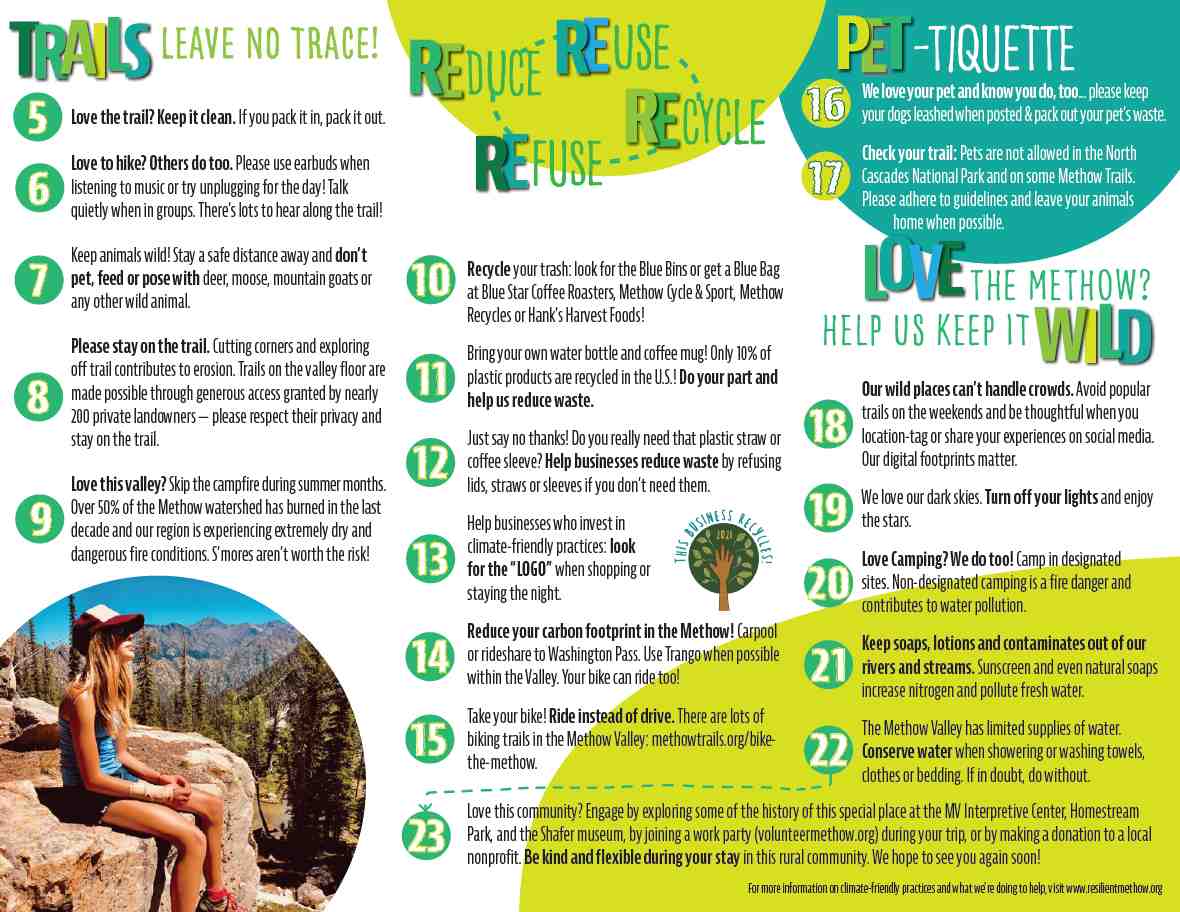 TwispWorks is proud to announce that we have completed our sixth round of Small Business Emergency Grants. Funding in this round focused on relief for businesses who lost revenue due to the 2021 wildfires. Although the demand exceeded our capacity, they funded sixteen businesses with grants of $1,500. A total of $24,000 was released. Grantees are:

In May of 2020, TwispWorks launched the Small Business Emergency Grants to provide relief for businesses impacted by the Covid-19 Pandemic. Partnering with the Methow Valley Long Term Recovery Group and Okanogan County Economic Alliance, the initial program gave businesses throughout the Methow Valley $1,500-$5,000 grants to cover essential expenses such as rent and utilities, advertising costs, and working capital to purchase goods. Over the course of the next year, they gave out a total of 63 grants and distributed $114,500 in Methow Valley’s business community.

This fall grants were given to businesses who lost revenue due to the 2021 wildfires. In light of the challenges and opportunities uncovered by COVID and the wildfires, we plan to continue Small Business Emergency Grants in the future with special consideration for businesses who want to invest in climate friendly and long-term resiliency changes. As part of our partnership with Methow Valley Citizen’s Council Climate Action Plan, we envision pivoting Small Business Emergency Grants to fund projects that would enable businesses to develop long term strategies and climate friendly practices, such as installing solar panels and other energy efficient technologies, developing online marketing tools, funding for training or business seminars, and other innovative projects. 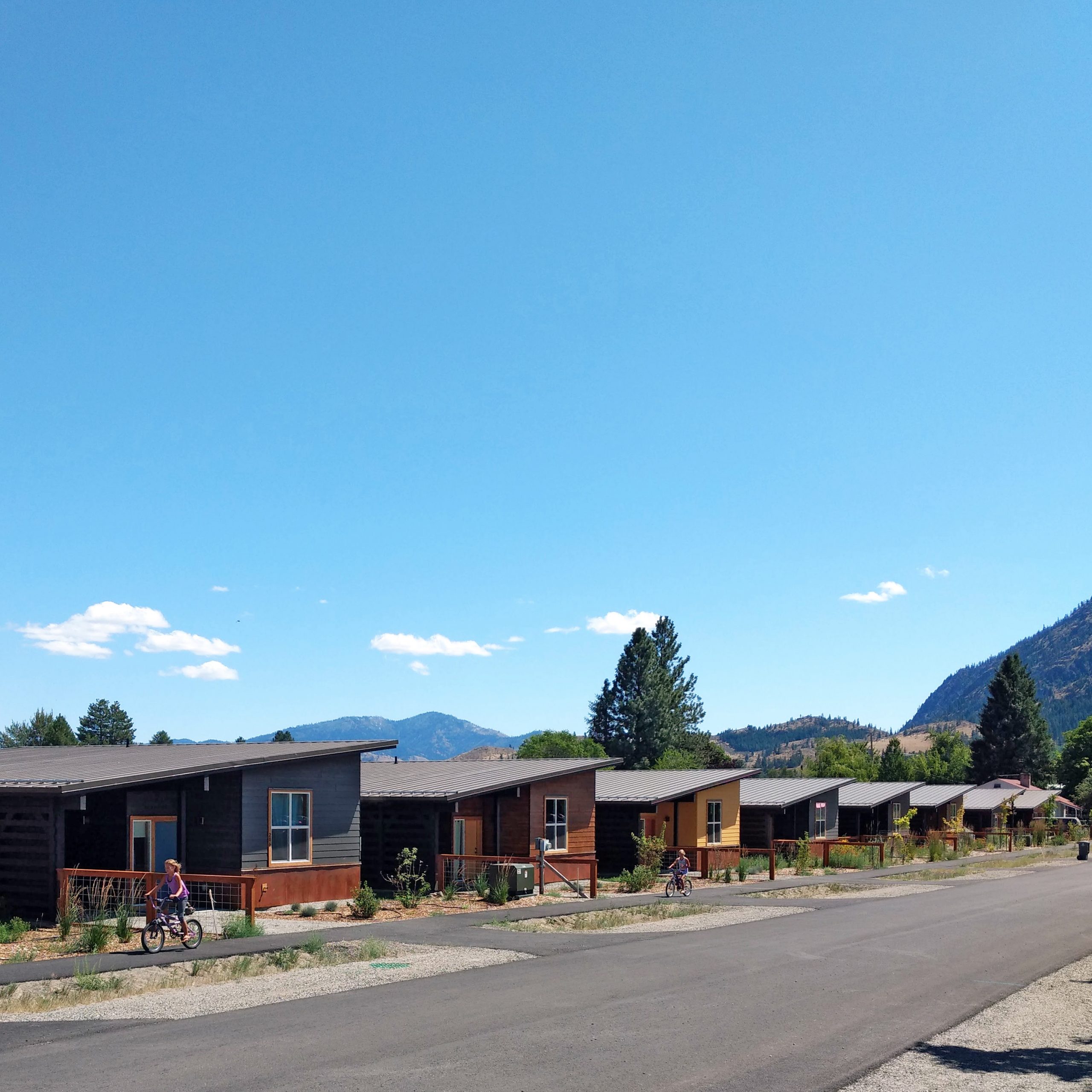 Deepen Your Connection to the Methow Valley

Like you, we care deeply about the land and community in the Methow Valley. That’s why TwispWorks and the Methow Conservancy have partnered to bring you a 5-week class series that will explore development pressures in the Valley.

Rural Changes in the Methow Valley:
A Series on the Landscape
and People of the Valley
Mondays, September 20 – October 18
7pm – 8:30pm
Zoom, link provided upon registration
Cost: $50, scholarships available

Classes will analyze new information on current conditions in the Methow Watershed and its people. You’ll hear about land use and protection, residential development, tourism, amenity migration, rural restructuring, wildlife, wildfires, water, and more. The series will conclude with a town hall style discussion about our shared future. For full details on each class and how to register please click here!

Rain or shine there will be jazz! Join The Marcus Duke Project 10/23 at 1pm on the Pavilion @TwispWorks or at the OSB Taproom in case of inclement weather. ... See MoreSee Less